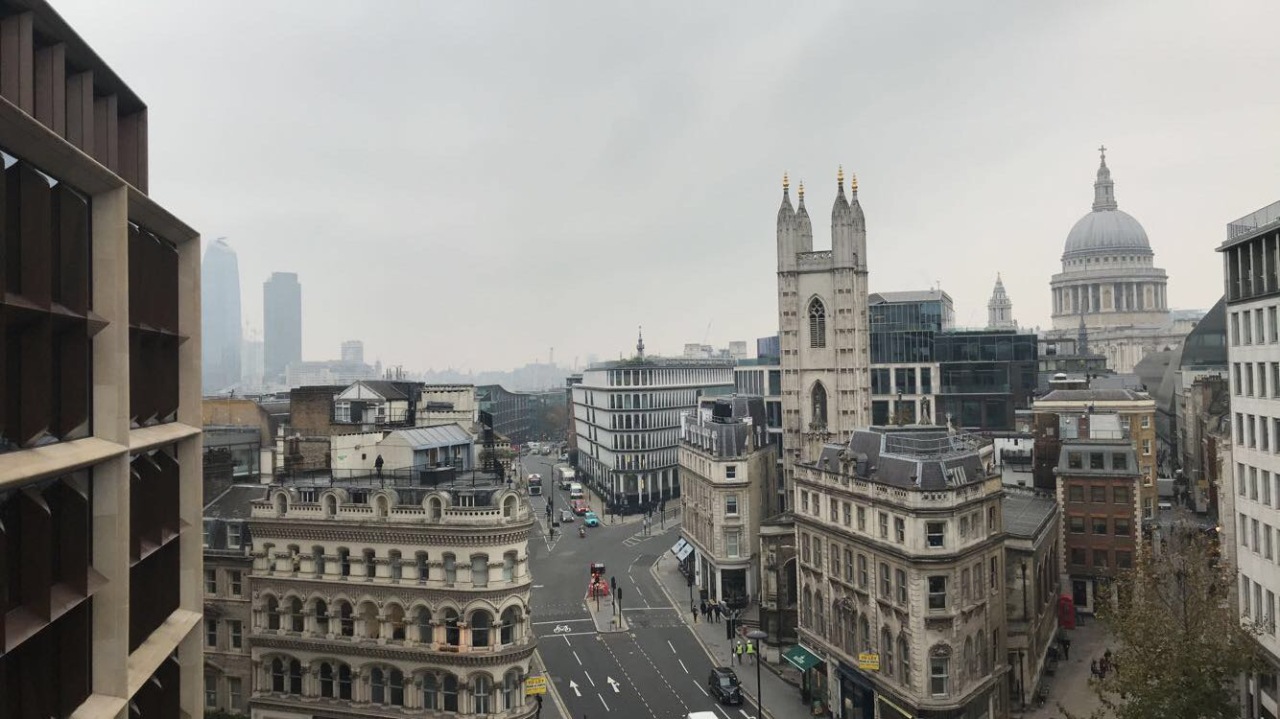 London was the destination: first class seats on the 9.38 to Waterloo was a good start!!

Mike pulled a few strings, making use of a great family connection, and we checked into the new Bloomberg HQ building in London at 11.15. Special thanks to David Hellier for hosting and giving up time in his busy day to show us round. As you’ll no doubt be aware Foster + Partners won the people’s vote and were then announced as the winner of the Stirling Prize in Oct 2018. It was therefore doubly exciting to have access to the building which was truly impressive. 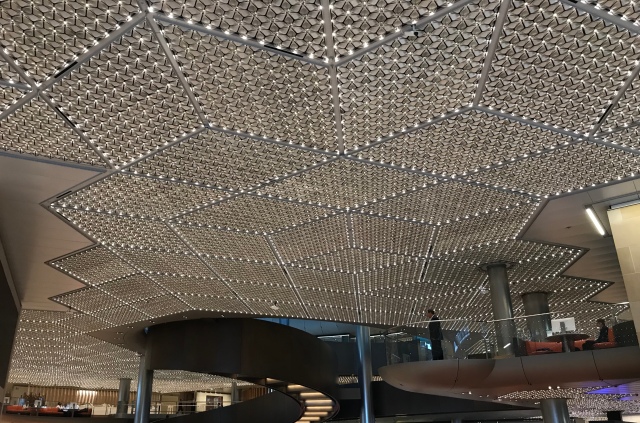 A lot has been written about the building which displays a ‘state of the art’ approach to communications – from the casual inter-action of colleagues bumping into each other over a cup of coffee to a global digital age with 24 hours news coverage being broadcast from the tv studio within the building. We can only add that it is one heck of a contrast from The Forge and lunch in the garden!! 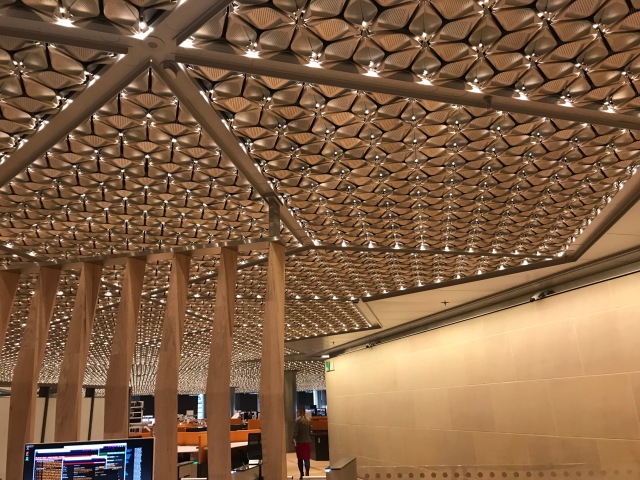 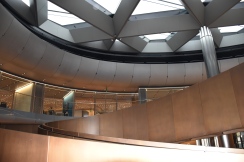 We visited the Mithraeum SPACE in the basement which displays some of the 600 roman artefacts found during the construction of the building. It’s worth half an hour of your time to visit and can be found adjacent to the new Bloomberg tube station exit. 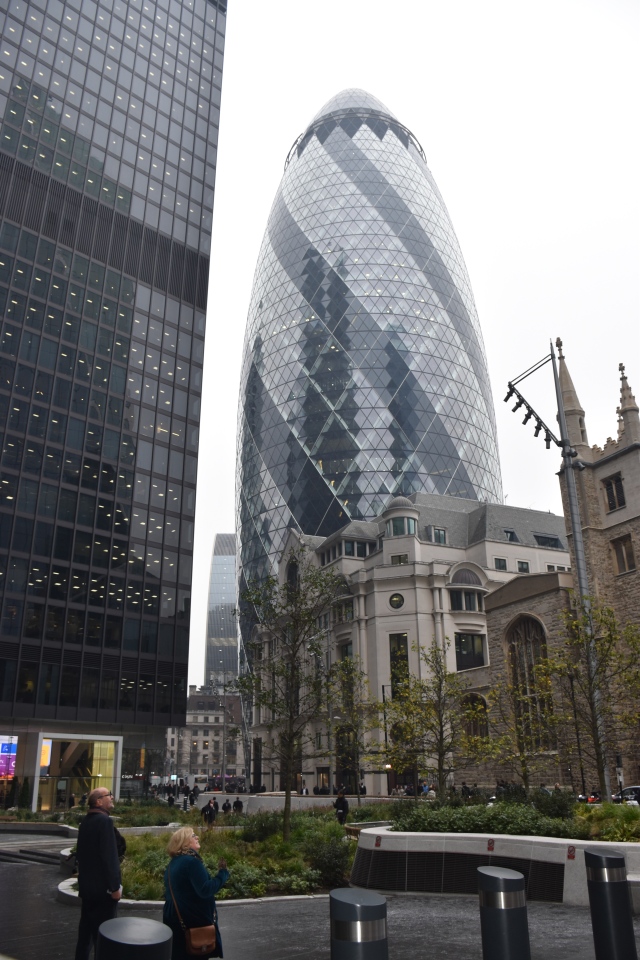 This was followed by a short walk between venues, which is a bit like a spot the building competition – it’s easy to forget just how rich in architectural heritage – past and present – the square mile is. 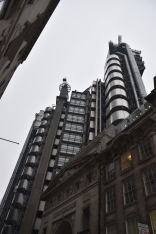 Lunch was in Searcys at the Gherkin – giving rise to comments about our heads being in the clouds!! Restricted visibility meant that we didn’t get the full panoramic effect but it did add a certain mystical quality. 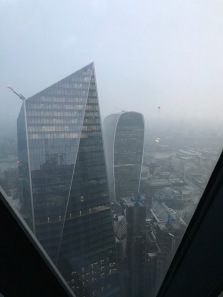 Our tribute to Sir Norm continued with a trip to the British Museum – easy to lose yourselves amongst the exhibits for a few hours. The Great Court looked brilliant at dusk. As a great public space which was still full of visitors at 5.00pm it provided an interesting contrast to the rarified atmosphere of the Bloomberg. 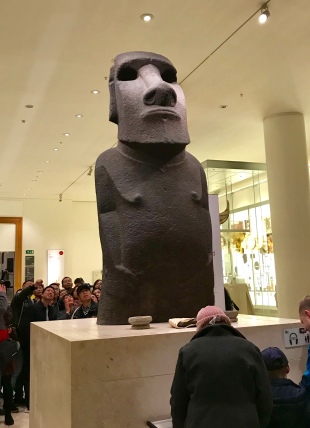 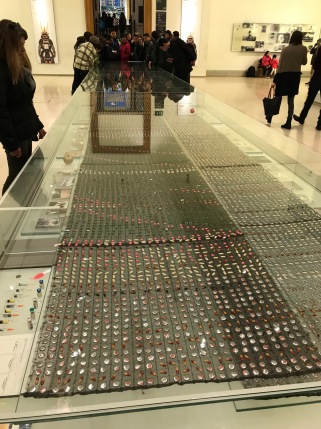 The average number of tablets consumed by an average British person in their lifetime…14,000!!

Handily, the Museum is just round the corner from the Holborn Dining Rooms. A choice from 300 gins provided the traditional close to a Forge Design Studio day out!

A Waterloo M&S buffet on the first class travel home finished off the day nicely!

Special thanks to our Director, Mike, for organising yet another a brilliant day out featuring an exclusive building tour, first class travel, great food and lots of laughs. We will have to try very hard to top this next year!